Lists of songwriting tips are great … but what I wanted to compile was a list of real game changing tips that if you action you’ll get serious results from.

This is a list of 5 “no phone in” songwriting tips. They have been lifted from videos and articles where successful songwriters talk about their process in detail. There is some real gold in here. I have tried some of them myself and they have not only made me a better songwriter but a more prolific writer. (See post script)

[Insert solemn, look into to the eyes moment] I believe if you can just do one of these tips consistently for 30 days you’ll grow massively as a songwriter.

Aww Man This Is All Po(o)p Music

Maybe that’s not a problem for you but if it is … I know, but we’re all going to have to put on our big boy/girl pants and put aside prejudice to learn and grow as a songwriter.

What’s important is that whether you’re writing pop, folk or trap music, songs which connect with their listeners have things in common. Yes, these songwriting tips are from popular artists/songwriters. That’s because they have the ability to write songs that resonate with people.

If you are open to it, you can take those ideas and write songs for your preferred genre to find ways to resonate with more of your audience.

Tip 1: Copy The Music You Love

Do you know who Stargate are? No? Maybe? They helped write some pop tunes you might know of including Beyonce’s “Irreplaceable”, Katy Perry’s “Firework” and a bunch of Rhianna songs. Whether those artists are your bag or not, this songwriting tip makes sense.

Copy music that you love. Break it down, understand how it’s put together. By doing so you start to understand how to create certain sounds. How parts interact with each other, etc. This makes it easier for you as a songwriter to find your own expression.

Think of it like taking apart an old clock and inspecting all the pieces. You see how the gears engage and mesh with each other. The delicate but important interplay of all the pieces. Rather than seeing the finished watch you see the craftsmanship and learn more of the craft.

Time well spent:
If you have a DAW and the resources, try and recreate songs you love the songwriting in. Maybe even a song you dislike but are super popular.
The point is not to create an exact replica but by disassembling and reassembling you will better understand the craft and craftsmanship behind the song.

If you’re not a DAW producer type person, write a “song report” (like a book report) on the song. Talk about each section. Listen to all the instruments/parts. What are the drums doing in each section? What is the bass doing in the chorus and how does that support the main melody? Note all the interesting things you find that you didn’t hear at first.

I’m leveling this one straight at myself. I haven’t co-written in a while – and I definitely should. I love creating by myself but time and time again I hear people talking about collaborating and I know it’s a great idea.

“But truthfully, I don’t think we really knew what we had when we walked out of there that day! We thought we’d just written a couple of good songs.”

And after a scathing 2 star review of the album in American Songwriter the group might have been right. But a Grammy in 2010 for song of the year plus album of the year is sufficient proof they had a song which resonated with people.

This isn’t a songwriting tip so much as a scenario which I hear time and time again. Finish songs, and get them out there. You never know how they will resonate.

Now an actual songwriting tip: if you haven’t co-written, you should give it a try.

Tor Erik Hermansen from Stargate is big on collaboration. He encourage songwriters to:

Getting into the room with people is like dating. You need to find out who you click with.
As veteran songwriters they all see the benefits in staying open to other people’s ideas. “Staying humble and open minded is the key to longevity”.

Fleetwood Mac’s, Stevie Nicks, discusses some fairly dysfunctional songwriting methods in this video. Sort of the antithesis of the above and non-collaborative.

There is no doubt that Fleetwood Mac wrote some amazing songs. Unfortunately heir songwriting methods leave a lot to be desired. It doesn’t seem like they were great for the interpersonal health of the band as well as their own mental health.

Another idea which kept cropping up in numerous interviews was the idea of demoing songs and actually capturing the final take. Capturing something special as it comes to you and demoing it could leave you with a piece of gold.

She was obviously quite fragile and very open about what had happened. But she had fire in her belly,” was how Epworth later recalled the emotionally charged day-and-a-bit it took to record the track. Adele had intended it to be just a demo, but she quickly came to realise she would struggle to recapture the “heat of the moment” emotion of that first recording. So the demo became the final track; and later one of her biggest hits worldwide; and then her first US No 1.

Get your studio space setup for demoing and sketching. Have a good mic patched and ready to capture the magic. This is like a landscape photographer who has their camera with them all the time and has their settings all worked out. They are ready to capture a magic moment when it happens.

Songwriting Tip Number 5: Make Time To Write & Do It Consistently.

Malcom Gladwell’s book Outliers mentions the 10,000 hours to “master a skill” principle. The idea goes that if you want to master something you need to spend 10,000 hours doing it.

What does that look like? If you were practicing songwriting for 3 hours per day it works out to be about 3 hrs a day every day for 9 years!

Before you throw your hands up in despair, this isn’t a hard and fast rule. As Malcom Gladwell clarifies in this video, it’s a helpful metaphor when understanding the level of commitment to your craft. Even more important is to be doing the right sort of practice.

Flush Out The Garbage

Someone who takes this metaphor seriously is the very successful Ed Sherran.

In his earlier days as a songwriter, he would write a song or two each day. He uses the analogy of a tap which starts with dirty/gross water flowing out. As you write more the flow becomes cleaner. You still might get the occasional clump of grossness but the flow will clear up and the quality will improve.

You are going to write bad songs, get them out of you, but keep writing and they’ll get better.

A Song Each Day?

You might think how can I write a song or two a day? In researching songwriting methods I’ve picked up he following points:

Get up at 6am and write until 7:30am everyday if you’re a morning person. If not in the morning, set aside 8:00pm – 9:30pm and write in the evening. The ideal time is up to you, the point is to write.

Also, create an area where you can write, even if it’s a closet.

Here they are again in “write them down and stick them on the wall” format:

In the spirit of “look what you can do if you do something consistently” here is a track I got finished recently. I made a change to my songwriting routine so I could get into the studio for 1.5 hours 4-5 days a week. By doing this I was able to write and release the song below in 2-3 weeks.

“Bring Me The West” is a royalty free spaghetti western track. I had a lot of fun writing it and learnt a lot by copying ideas from the soundtrack of The Good, The Bad and The Ugly by Ennio Moriccone. I also learnt that whistling in tune is much trickier than it would seem. 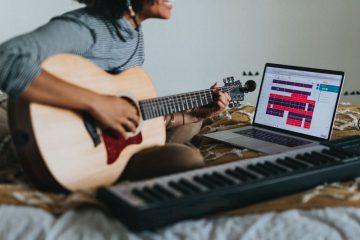 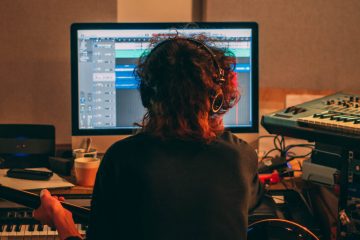 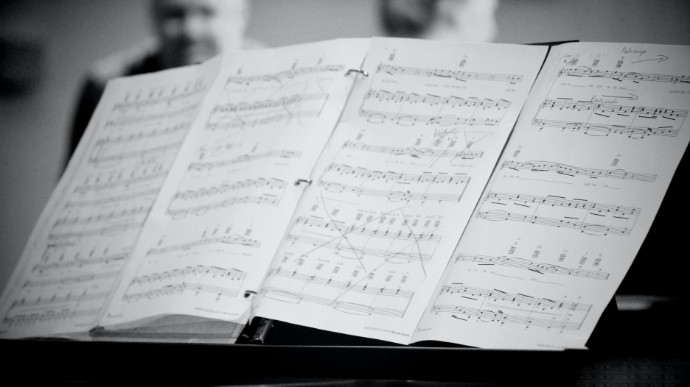